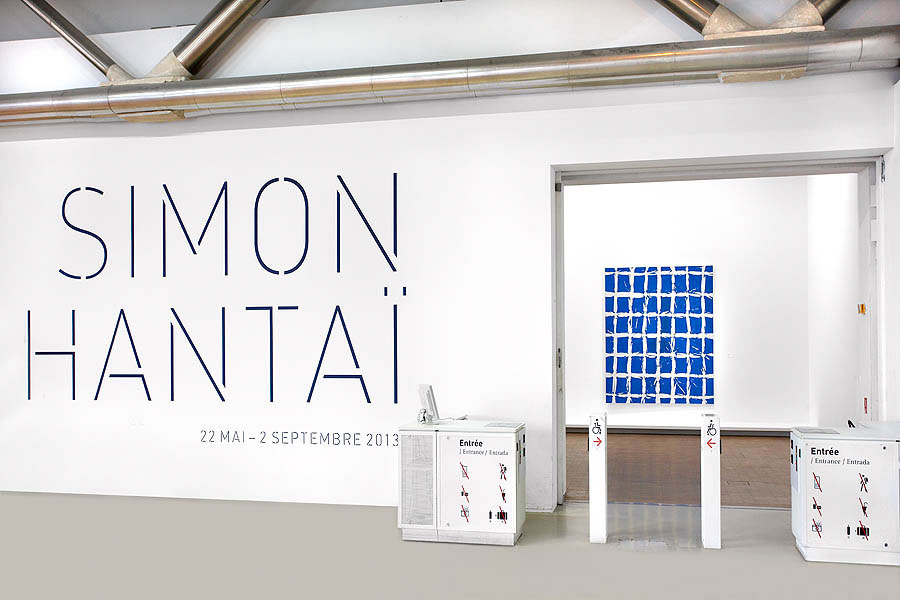 For the first time, the Centre Pompidou brings together the work of one of the greatest painters of the second half of the 20th century, a master of abstraction: Simon Hantaï. Five years after the death of the artist, the Centre Pompidou presents a unique exhibition of Hantaï's work ? the first in more than thirty-five years. Featuring more than 130 paintings produced from 1949 to the 1990s, this exhibition, unprecedented in its size and retrospective nature, bears witness to the importance and abounding richness of a now internationally-recognised body of work. The last retrospective dedicated to Hantaï's work was shown in 1976 at the Musée National d'Art Moderne. Since then, opportunities to view Hantaï's work have become extremely rare. Hantaï voluntarily retired from the art world, refusing to exhibit except on exceptional occasions, up until his death in 2008.
Primarily known for what the artist called "pliage comme méthode" (folding as method), which he began in 1960, Hantaï's work developed in surprisingly diverse stages.
The exhibition opens with the early years of creation that followed his arrival in France and presents a chronological reading of his artistic career from the 1950s. From surrealistic paintings to those created with small brushstrokes, this largely unrecognised period ended with paintings of writing. It culminated with two major works from 1958-1959 reunited by the Centre Pompidou for the first time: Écriture Rose and À Galla Placidia.

From 1960, in the Mariales series, Hantaï "blind" painted a pre-folded surface, covering it with colour: "This time colour is the principal form [...]. The light seems to permeate the colour from behind, like stained glass. In truth, the colour is the light." (Dominique Fourcade). From then on, each series of paintings made use of this method in very different ways, allowing Hantaï to develop and refresh formal and original compositions, often on a large scale. This is how the painter became established as one of the greatest colourists of his time. At that time his work was highly visible on the French scene and would influence a whole new generation of younger painters. A long absence followed, punctuated by rare events such as a new series of works, the Laissées, which appeared in the 1990s. These saw Hantaï cut up the large Tabulas from the 1980s and extract fragments of them, which became art works in their own right. Finishing with this series, the exhibition contributes to the extraordinary rediscovery of a magnificent painter who was one of the most important figures in the second half of the 20th century.

Simon Hantaï retired from the art scene well before his death. Can we describe the retrospective at the Centre Pompidou as particularly unprecedented?
Alfred Pacquement:There have been very few opportunities to view Hantaï's work in the last few decades, even though visitors to the Centre Pompidou have been able to see some of his paintings displayed in the museum almost permanently. From 1982, and after the significant exhibitions at the CAPC in Bordeaux and in the French pavilion at the Venice Biennale, Hantaï voluntarily chose to retire from the art scene.
He no longer exhibited and considerably reduced his pictorial production, eventually breaking off completely, or almost. Why did he retire? Because he no longer wanted to take part in what he felt was the negative development of a system that was dominated by financial speculation and deviated from the true purpose of a work of art. His response was to remain silent, to no longer appear, except on very rare occasions. He rejected many offers for museum exhibitions and our exhibition is therefore the first complete retrospective of his work.

Daniel Buren states in the exhibition catalogue that "Simon Hantaï is far from holding the position which his work deserves in the history of 20th century art." What is this position and what was his contribution?
AP: Simon Hantaï occupies a major position in post-war art. He reconsidered the space of the painting, like Jackson Pollock, who undoubtedly influenced him. He played a major role for a generation of painters emerging in the 1960s and 1970s, who were looking to redefine the constituent forms of the painting as an object.
When we look at the full picture, his work reveals a remarkable career, at each stage of which Hantaï appears to be a major, and often unique, painter. The surrealistic paintings, where the imaginary is on a par with the visual qualities; the controlled gesturality of the paintings from the second half of the 1950s presenting a highly original version of "all-over space"; the paintings of writing, peaking with Écriture Rose, a unique body of work in 20th-century art history. Finally, this re-exploration of the space of abstraction in the 1960s and 1970s, two extraordinarily prolific decades when one series followed another, series which were extremely diverse, yet united by the pliage method which presided in all his creations.

Beyond abstraction, can we say that Hantaï is a painter of colour, a painter of gesture, a painter of light? Following on from Pollock and Matisse?
AP: Hantaï has often said that he looked to combine Matisse's scissors and Pollock's stick. Hence, on the one hand, direct cutting in the colour of the cut gouaches by Matisse where we find a continuation in the cut which suggests the folding of the canvas, and, on the other hand, this new space, without composition or centre, which Pollock invented and Hantaï continued. We could also add a third influence, that of Cézanne, who introduced white, the non-paint, into the space of the painting.
After a period that could be classified as gestural, Hantaï, through pliage, retains the gesture and blind paints a surface which is only revealed once unfolded and stretched on its frame. He always sought to erase the folds, so as not to show the method, which was only a necessary phase in the work's creation. Hantaï is also, and perhaps above all, a remarkable painter of colour, which this exhibition clearly demonstrates.

What light did you want to shed on his work in this retrospective?
AP: Paradoxically, for a painter of this importance, at a first retrospective, we wanted to be as exhaustive as possible, forming a chronological journey and focusing on certain essential elements of the work. It is clearly divided into two broad phases, which are differentiated by the development of pliage as the exclusive working process from 1960. For all that, we could not neglect the paintings before pliage, whether those from the surrealistic period or the remarkable paintings with small "alarm clock strokes" (produced using a circle of metal detached from an alarm clock). This first phase culminates in two immense paintings united for the first time in this exhibition: Écriture Rose and À Galla Placidia. Afterwards, from the Mariales, the first series of paintings made by folding the canvas and revealing the unpainted parts once unfolded, the space of the painting was transformed, reinvented, and the folding method allowed remarkable variants, the Meuns and the Tabulas for example.


Sacks, knots and colour: Les Meuns 1967-1968 (By Isabelle Monod-Fontaine)
"A large knot in all four corners, and in the middle of the crude sack a string strangling it." That is how Hantaï himself described in a few words, in 1998, the pliage method which gave birth to the Meuns series. He worked on them for two years, in 1967 and 1968, after he and his family had moved to Meun where he had found a house-studio in 1966.
There were two new features compared to the pliage methods developed by Simon Hantaï in his preceding works: the knotting of the corners of the rectangular canvas produced these characteristic rounded shapes and the strangling of the centre produced an empty space, a non-painted area open in the middle, an empty space revealed once unfolded as literally crucial...
There was actually more space between the coloured shapes in the series, the empty space (the white of the canvas left in reserve, protected by the knots and the folds they created) seeping from the centre between the painted shapes and up to the edges. Unique empty spaces in a painting where the all-over method, that was more and more Pollockian, reigned until the middle of the 1960s. In the Catamurons and above all in the Panses, the web of gestures and colours had begun to loosen, but it is in the Meuns, for the first time, that the empty space ? the white ? is made active. Just like Matisse's cut gouaches, seen by Hantaï from 1949, viewed again in 1960 and contemplated since then, which somehow infuse the canvases of 1967-1968.
Hantaï did not immediately, or not always, let this exposed empty space perform to its full extent. He did not hesitate to return to the original monochromy of these "large blue, green, mauve flowers..." (André Fermigier, 1968) and, during the unfolding or after, he sometimes added different, more diluted colours in the crease lines, which wind through and almost overlap the great masses of colour.
It was a complex process and the great Matissian lesson is therefore not the only source to examine. Beyond this magnificent monochromy, to which the admiring critic has too often reduced them, the Meuns (painted with oils) reveal a specific, revitalised, ever-changing colour, a living substance cut deeply by the folds.

Two major works: À Galla Placidia and Écriture Rose (By Dominique Fourcade)
When we considered the layout of the Simon Hantaï retrospective at the Centre Pompidou two years ago, we found ourselves facing many unknowns. But we were certain about one thing from the very beginning: Écriture Rose and À Galla Placidia were together the first major accomplishment in Simon Hantaï's work, and we were convinced that uniting them, which had never been done before, would be a highlight of the exhibition.
Écriture Rose and À Galla Placidia were painted in 1959, through the course of the whole year, one in the mornings and the other in the afternoons. To produce these two immense paintings, Hantaï invented and developed two techniques, a twofold approach, writing and small brushstrokes, which he had tried both together and separately, in a group of paintings that we might call preparatory or satellite, the best of which are also featured in the exhibition. In a powerfully original two-part space, Écriture Rose and À Galla Placidia ambitiously implemented ? and beautifully sum up his career at this stage ? everything that Simon Hantaï knew about Western painting (including the work of Jackson Pollock), everything he knew about himself and everything he could know about the human condition. Inseparable, and exhibited together for the first time, these paintings are major works from the second half of the 20th century.