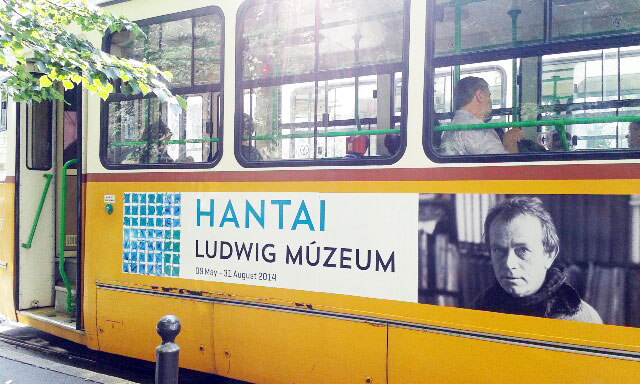 The Ludwig Museum - Museum of Contemporary Art will present the first major exhibition of Simon Hantai in Hungary. The large-scale retrospective surveys the key aspects and periods within the oeuvre of the internationally renowned artist of Hungarian origin, from his early paintings executed in Hungary, through to his final works.

In 2013 the Centre Pompidou showcased a highly successful exhibition of Simon Hantai´s works. The Ludwig Museum is privileged to organize Simon Hantai´s solo exhibition in collaboration with the artist´s family as co-curators. Further enhancing the significance and distinctiveness of the retrospective, the sixty works on view include a number of previously unknown pieces. In addition to the artist´s bequest housed outside Hungary, the show also focuses on paintings belonging to Hungarian collections, thus providing a significant source for art connoisseurs and supplementing the previous international exhibitions.

Simon Hantaï was born in 1922 in Biatorbágy, Hungary, in the vicinity of Budapest. He studied at the Hungarian Academy of Fine Arts in Budapest, under the direction of Vilmos Aba-Novák, Béla Kontuly and István Szonyi. In 1948, Simon Hantai won a scholarship in Paris which was withdrawn as a result of the political changes. Before that the young painter immigrated to France with his wife Zsuzsa Biró, a fellow painter, they spent couple of month in Rome. Italian travel experiences influenced his artistic vision. When he met André Breton and his circle in Paris, he was painting vivid colourful canvases inhabited with phantasmagorical creatures, organic and biomorphic forms, as well as engaging in experiments concerning his medium and technique. Breton organised his first solo exhibition in Paris in 1953, praising Hantai´s work as a great departure in its accompanying catalogue. In the wake of his continuous experiments conducted in parallel with his Surrealist paintings, his art practice became increasingly gestural: following the Paris presentation of the New York School, he became inspired by abstract expressionism, and it was above all Pollock´s work that motivated him to turn to gesture painting. In the 1960s, he began to develop his own unique technique of image-making (the so-called pliage): by creasing and folding the canvas, and then covering it with layers of paint, he created specific abstract patterns on huge surfaces, drawing on the results of the Pollockian sense of freedom in painting, as well as on the explorations of light, colour and surface accomplished by French artists. His works created by the method of folding became arranged in consecutive series, or sequences of form (Mariales or The Virgin´s Mantles, Catamurons, Panses or Sausages, Meuns, Études, Blancs or Whites, and Tabulas).

In 1982, Hantai represented France at the Venice Biennale; and at that time, he decided to withdraw from public life. His absence from the public art scene, however, did not imply abandoning art: Hantai never stopped painting and constantly revisiting his work.

He died in September 2008 in his Paris home.

Signaling the importance of his oeuvre, Hantai´s works are included not only in major Hungarian public collections, such as the Museum of Fine Arts, the Hungarian National Gallery and the Ludwig Museum, all in Budapest, and the Janus Pannonius Museum in Pécs, but also in world-famous international collections, such as the Solomon R. Guggenheim Museum in New York, the Musée National d´Art Moderne and Musée d´Art Moderne de la Ville de Paris, the Vatican Museum in Rome, the Musée d´Art Contemporain in Nice, Christie´s in London, and Galerie Jean Fournier in Paris, as well as in Hungarian, American, Italian, Belgian and French private collections.

The exhibition is organized by the Ludwig Museum – Museum of Contemporary Art, Budapest in collaboration with the Archives Simon Hantai.